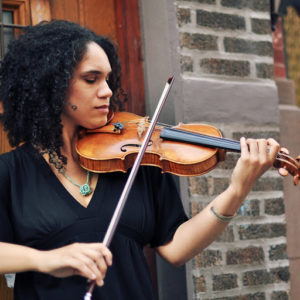 Jessie Montgomery (1981-) is a violinist and composer who began composing and improvising at the age of eleven. When she was in high school, she was the recipient of the Composer’s Apprentice Award from the Chamber Music Society of Lincoln Center. She later earned a Bachelor’s degree in violin performance from Julliard and a Master’s degree in composition and film scoring from New York University. Since 1999, Montgomery has been affiliated with The Sphinx Organization, which supports the accomplishments of young African-American and Latino string players.