George Bridgetower (1778-1860) was a virtuoso violinist and composer, and he was the original dedicatee of Beethoven’s Kreutzer Sonata. He was born in Poland, but lived in England for most of his life. He was performing by the age of ten, and when he was thirteen, he caught the attention of the British Prince Regent (later King George IV) who oversaw his continuing musical education. 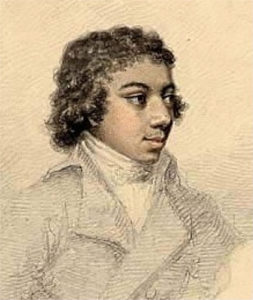 In 1803, Bridgetower performed for Ludwig van Beethoven in Vienna. Beethoven was so impressed that he dedicated his Violin Sonata in No. 9 in A major (Op. 47) to the violinist. The two performed it together later that year, with Beethoven on the pianoforte. Unfortunately, Bridgetower and Beethoven had a falling out soon after, when Bridgetower had insulted a woman who turned out to be Beethoven’s friend. Beethoven, in anger, did not communicate with Bridgetower after that, and changed the dedication of the new violin sonata to virtuoso violinist, Rudolphe Kreutzer, who never played it, saying it had already been performed and it was too difficult.

Back in England, Bridgetower was elected to the Royal Society of Musicians in 1807. He also attended Trinity Hall, Cambridge where he earned a Bachelor of Music in 1811. Not only a violinist, Bridgetower wrote works for violin, piano, voice, and a range of ensembles.