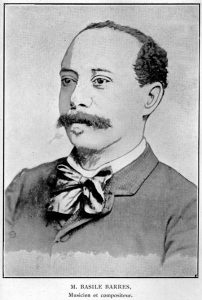 Basile Barès (1845-1902) is the only American composer known to have a copyright assigned to his composition while he was enslaved. He was apparently born into slavery in New Orleans, and his piece, “Grande polka des Chasseurs à Pied de la Louisiane,” was published in 1860, when Barès was only sixteen years old. He worked in a music shop in the French Quarter for his whole life, continuing employment under his former owners after emancipation. He was also well known in the French Quarter as a street pianist, and was a prolific composer of works for piano, especially in the idiom of parlor music of the late 19th century.