Available for order today are the Music by Black Composers Violin Volume I; The Rachel Barton Pine Foundation Coloring Book of Black Composers, with artwork by Sho-mei Pelletier; and the Black Classical Composers timeline poster, designed jointly with the Sphinx Organization. 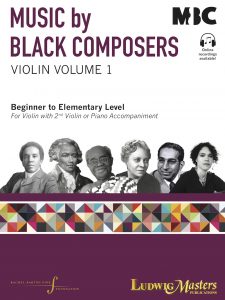 MBC’s Violin Volume I is published by LudwigMasters, and features 22 works for violin for beginner- and elementary-level players. These works are by 16 Black composers, spanning 1767 to 2014, and representing the United States, Brazil, Puerto Rico, Cuba, Ghana, Nigeria, Switzerland, France, and England.

Included with the book are streamable reference violin and piano recordings of each piece by Rachel Barton Pine and pianist Matthew Hagle. In addition to music, the book contains biographies of each composer, as well as feature articles: one about Black orchestras past and present, and one and about African-American leaders who played violin. There are also profiles of three Black current role models in classical music: Sphinx founder, Aaron P. Dworkin; founder-director of the Hyde Park Suzuki Institute, Lucinda Ali-Landing; and concert violinist, Tai Murray. Videos of Sphinx laureates Adé Williams and Clayton Penrose-Whitmore performing each piece are also available on MBC’s website.

Violin Volume I is the first in a violin series that will include eight volumes, graded by difficulty from beginner to advanced concerto-level playing. Additional orchestral instruments will be the subject of multiple future MBC volumes, and subsequent publications will include works for school orchestras and chamber ensembles. 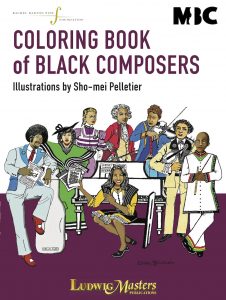 The Rachel Barton Pine Foundation Coloring Book of Black Composers features 40 remarkable international Black composers throughout history, and was illustrated by artist and Dallas Symphony violinist Sho-mei Pelletier. Each composer’s vivid illustration is accompanied by a biography that puts his or her life into historical perspective.

In partnership with the Sphinx Organization, MBC has also created a timeline poster designed by Sphinx’s Julie Renfro that features more than 300 Black classical composers from around the world.

Both of these educational tools are also published by LudwigMasters.

These four projects place Black classical composers and much of their previously overlooked music into today’s cultural consciousness. In doing so, the RBP Foundation hopes to inspire Black students to begin and continue instrumental training, make the music of Black composers available to all people, and help change the face of classical music and its canon.