Music by Black Composers / About Us / MBC Team / Ajay Mallya 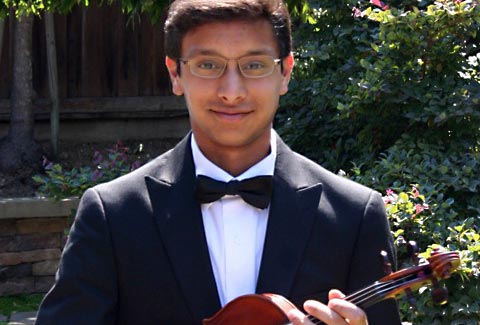 Ajay started learning violin at age 3 and is currently a student of Zhao Wei of the San Francisco Conservatory of Music.

He has won local, state, and international violin competitions and awards, and made his Carnegie Hall debut at age 12 with the Carnegie Honors Orchestra of North America. Subsequently, he was chosen to perform a recital in Carnegie Hall at age 13. Ajay is currently a member of the California Youth Symphony. He also enjoys chamber music at the California Music Preparatory Academy and has performed at the California Summer Music festival and the Summit Music Festival. In 2017, Ajay will be traveling to India to perform a recital at the National Center for Performing Arts, and in 2018, he will be traveling with his orchestra to Russia and Eastern Europe to perform at such venues as the Shostakovich St. Petersburg Philharmonia.

Ajay is a 9th grader at Bellarmine College Preparatory School, where he plays chamber music and represents the school on the running team. He hopes to double major in violin and science in college.

During his spare time, Ajay teaches violin at his middle school as a sectional coach, and is thrilled to be part of the Rachel Barton Pine Foundation.