Learn about all of these accomplished composers and many more through The Rachel Barton Pine Foundation Coloring Book of Black Composers.

The first of its kind, this book honors forty remarkable international Black classical composers from the 1700s to the present day. Each vivid illustration by artist Sho-mei Pelletier is accompanied by a biography that puts his or her life and music into historical perspective.

Whether you are a music fan or a student, The Rachel Barton Pine Foundation Coloring Book of Black Composers offers a fun, educational, and eye-popping way to celebrate Black composers’ contributions to classical music. 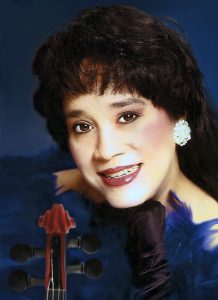 Sho-mei Pelletier is a graphic artist and the Associate Principal Second Violin with the Dallas Symphony Orchestra. She follows a legacy of musicians and artists; families from Mexico, China, Canada, and Austria; and religious influences from Buddhism to Judaism.

Sho-mei has been an active member of the Dallas Symphony and its Outreach Educational Programs since graduation from Indiana University (1975) where she was a scholarship student, and later, a Teaching Assistant with the world-renowned violin pedagogue Josef Gingold. Other earlier teachers included Ivan Galamian, Sally Thomas, Elaine Richey, Sidney Harth, James Oliver Buswell, Angel Reyes, Dr. Harold Wolf, Dr. Frank Spinosa, and her father, Dr. Harold W. Pelletier. Many of these teachers taught during summer music festivals and camps that the Sho-mei attended while growing up.

Her musical affiliations include playing Associate Principal Second Violin for 25 years in the Santa Fe Opera, as well as violin soloist with the Dallas Symphony Orchestra, the Dallas Chamber Orchestra, the Voices of Change, the Dallas Bach Society, the Walden Chamber Series, the Fine Arts Chamber Player’s MAZ Duo, the Kodaly Duo, the NEW Arensky Piano Trio, the Dallas Symphony’s YES (Youth Educational Series) String Quintet, and the Young Strings Trio. She has also appeared with the New Mexico Symphony, the Mesa Symphony, the Tempe Symphony, the Evansville Philharmonic, the Owensboro Philharmonic, the World Youth Symphony Orchestra at Interlochen, the Sun Valley Festival Orchestra, and the Flagstaff NAU Festival Orchestra. She is a founding faculty member of the Dallas Symphony’s award-winning Young Strings program (1992), which supports exceptional and underrepresented string students in the city of Dallas. Her memberships include ASCAP, TMEA, and other national educational organizations.

Sho-mei has been a visual artist since childhood and has won several juried art competitions. She enjoys oil painting and has completed over 55 canvases, exhibiting her work in several galleries throughout the country, including in Santa Fe, Philadelphia, Phoenix, and Dallas. She is also the author and illustrator of numerous music publications including The Simple Dictionary for Classical Musicians: A Humorous Collection of Terms, Types, and Repertoire (2000), Funny Composers!: Caricatures in FULL Color and Black & White (2009), Wacky Musical Instruments! (2010), and Perfect Intonation in 60 minutes (for violin, 2014).

For almost 40 years, she has been married to bassist Dwight Shambley, who has been the only African-American member of the Dallas Symphony for 46 seasons. They have two children.